In fact, this review (instruction) on the EZ Flash Omega is the most complete, but if I forgot about something, you can correct me by writing a letter to the e-mail: help@gbasp.ru 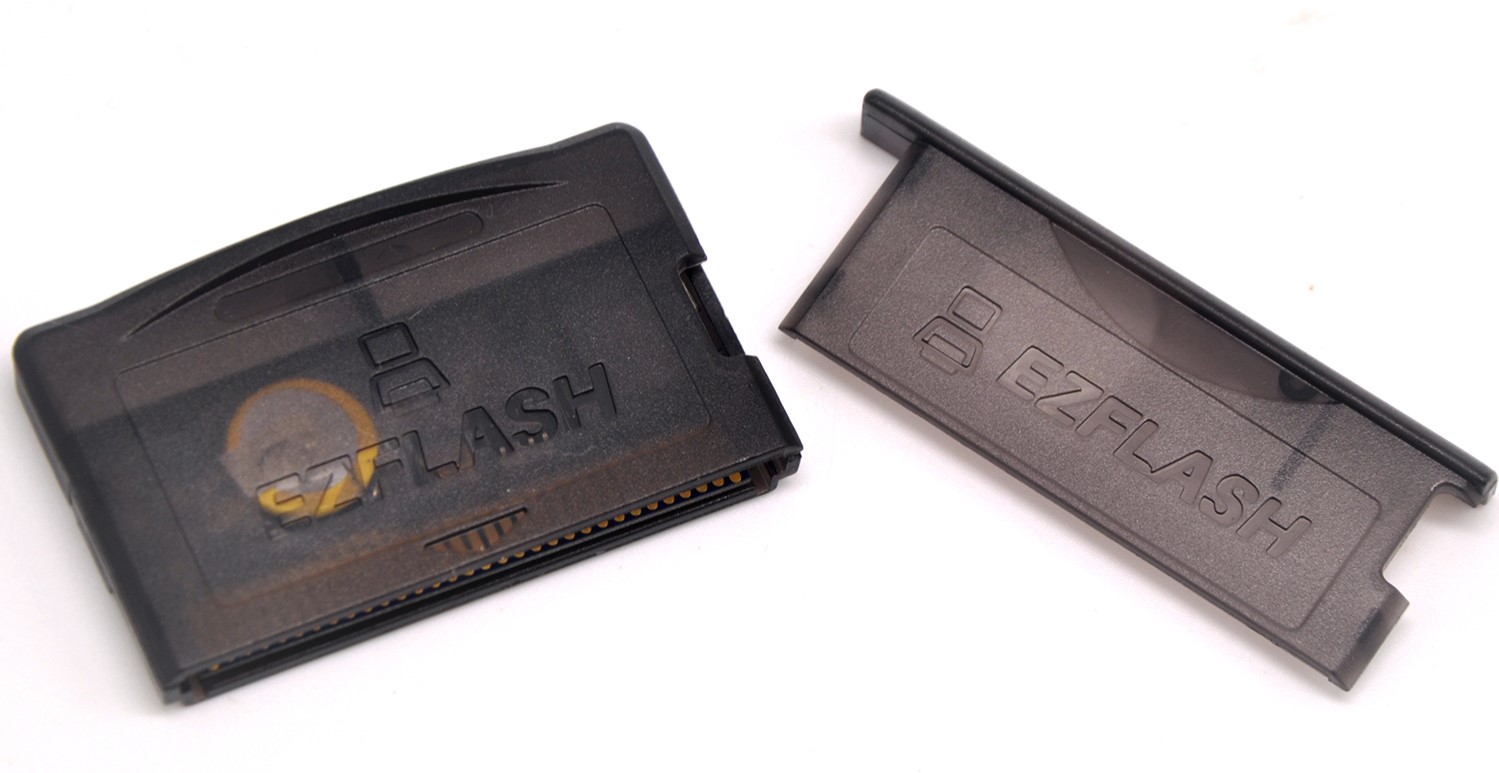 Where can I buy?

You can buy EZ-FLASH Omega here on Aliexpress: 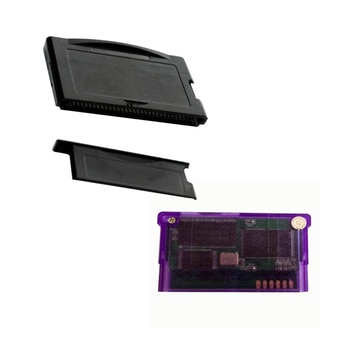 What else do we need to purchase?

Out of the box, the Ez Flash Omega cartridge comes with a replaceable housing for the Nintendo DS Lite (so as not to protrude from the housing). However, for normal use of this cartridge in the Gameboy Advance SP, a few more things must be purchased:

You can buy micro sd card here on Aliexpress: 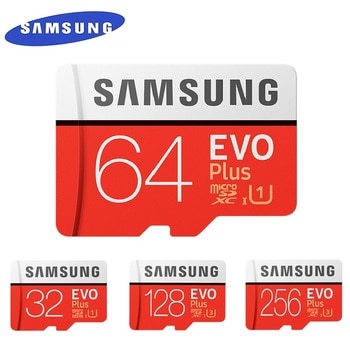 2. Card reader to the memory card. (To record games from computer to memory card). Of course, this is not for the purpose of piracy (we are strictly against this! And we condemn such behavior), but solely for informational purposes.

You can buy card reader here on Aliexpress: 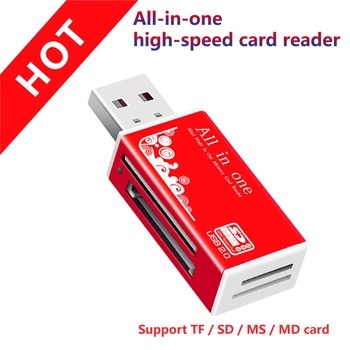 All this must be purchased separately. And after you have the cartridge itself, the memory card and the card reader, you can proceed further.

What format should the memory card be formatted in?

How to work with the EZ Flash Omega cartridge?

So, we insert the memory card into the cartridge, and then the cartridge into your Game Boy Advance SP. Turn it on and get into this menu: 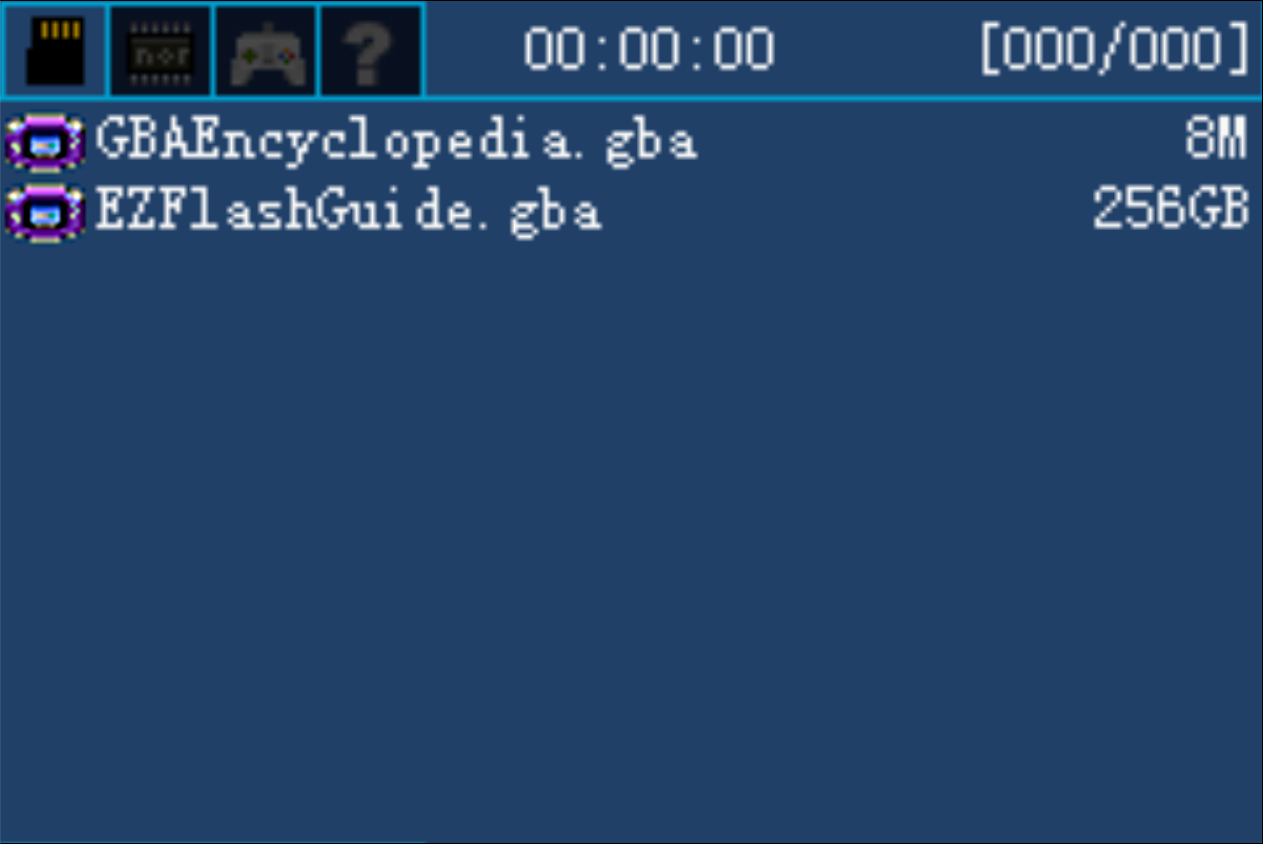 This is the start screen and shows all of our folders and games. From here we start the games, here we can delete the file and so on.

To navigate the menu, you need to press the buttons L and R.

The next menu shows games stored in NOR memory. This is just a list of games you can run them or clear NOR memory. 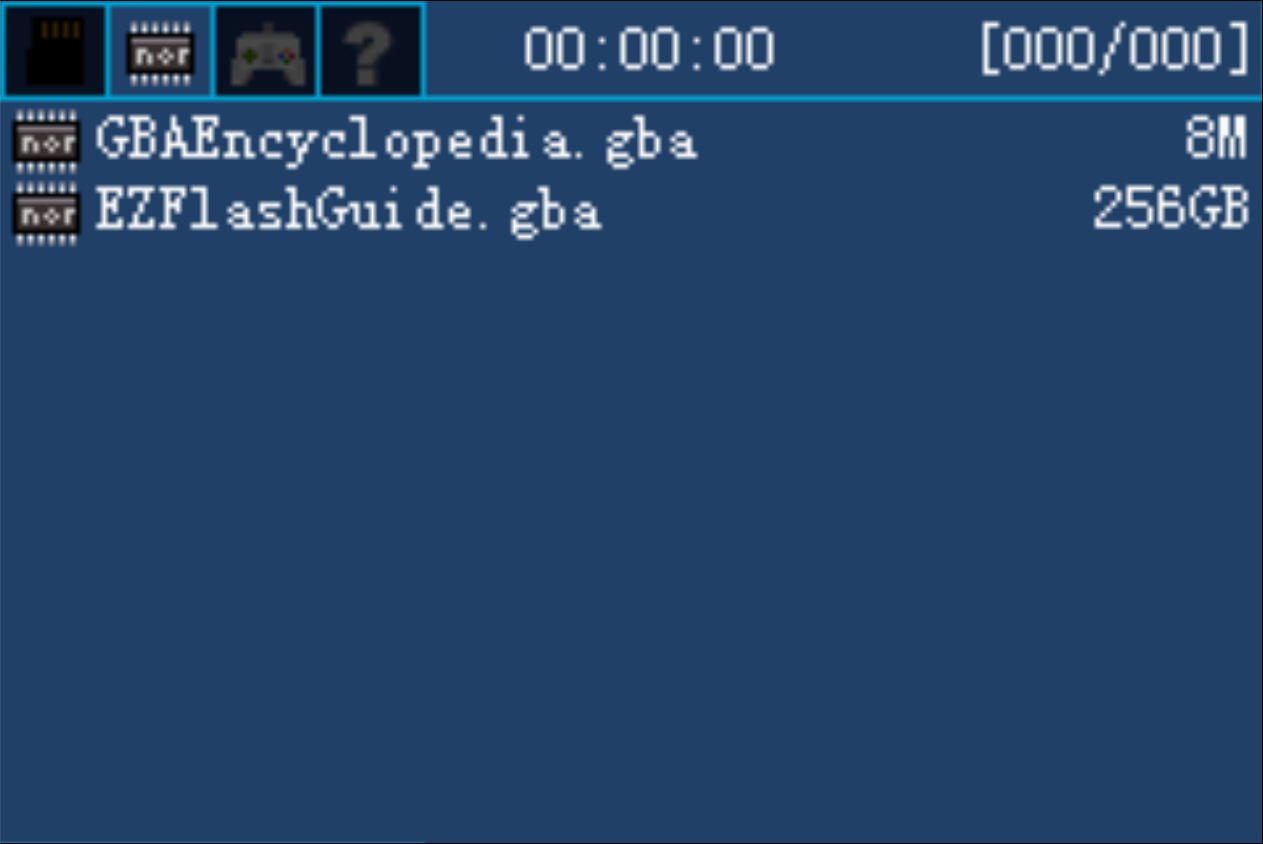 The next menu is settings. 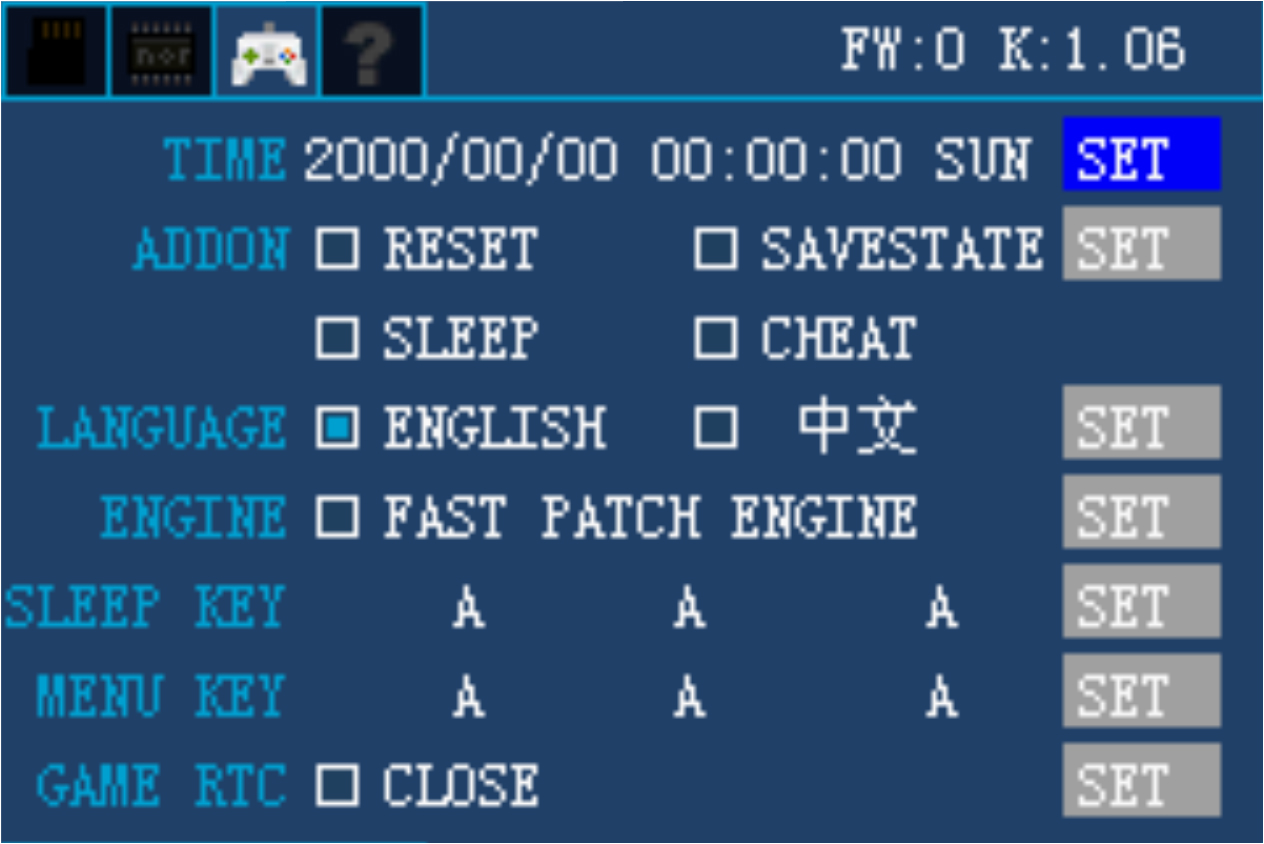 There are many settings, so let's figure it out:

Addon - when starting games, you can choose such a launch option as launching with an addon. There are 4 addons:

Reset - the ability to exit the game without restarting the console.

SaveState - enables saving in real time. If you activate this feature, then pressing the key combination to exit the game, you will have a menu of three positions (Reset, Save and Load). 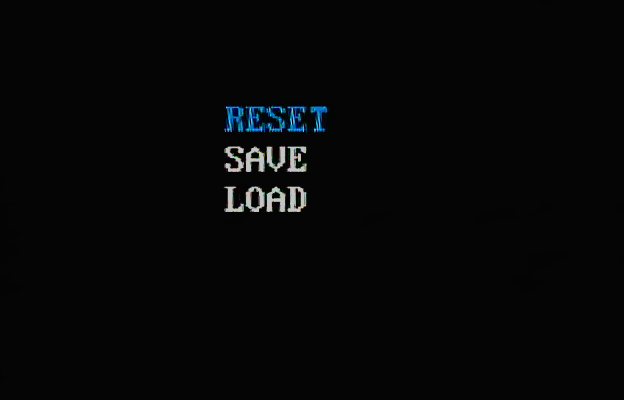 If you do not enable this feature, then when you press the key combination to exit the game, this option will not be available, it will immediately go to the main screen.

Sleep - the ability to turn off the screen and put the game into sleep mode (needed for short pauses to distract for 10 minutes).

Cheat - the ability to enter codes.

Language - choose between English and Chinese.

Engine - This option is enabled under normal circumstances, disable it if you have a homemade game or heavily modified game.

Sleep Key - the ability to change the combination of buttons to go to sleep.

Menu key - change the combination of buttons to exit the game.

Sleep Key and Menu Key only work if the game is running in Boot with Addon mode.

Game RTC - For games with a real time clock (like Pokémon). Can be disabled if you do not play such games.

And the last menu contains a list of keyboard shortcuts for the Ez Flash Omega cartridge (actually a mini instruction). 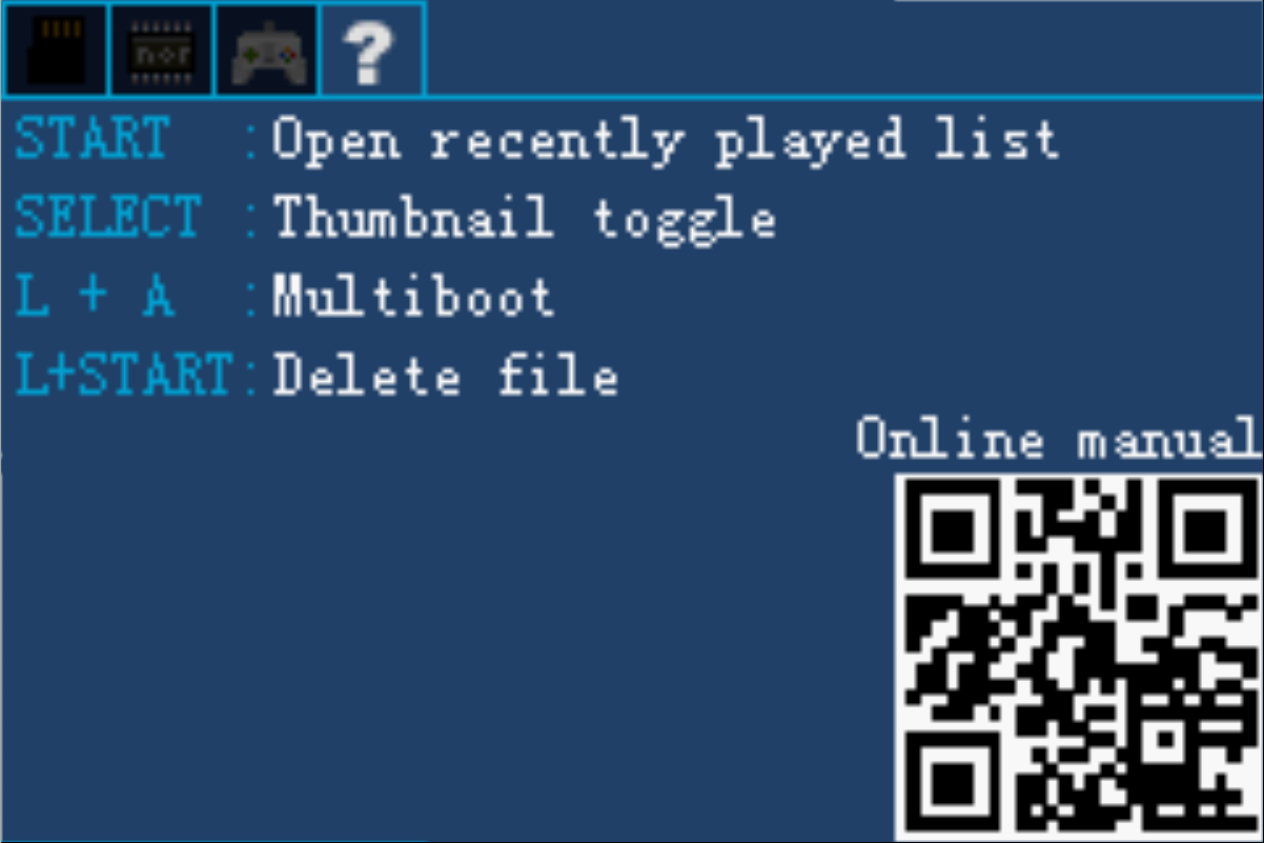 How do I start games?

Games can be launched in two ways. The first way: go to the first screen of the menu (if the games are in a folder, then go to the folder), select the game and press the button A and the menu opens: Clean boot - loading a clean game. We launch it if the game does not start in the Boot with Addon mode. This is necessary for those games that break if modified with addons.

Boot with addon - loading the game with the addons discussed above (exiting the game, cheat codes, real-time saving, sleep mode)

Write to NOR clean - write the game to NOR memory without addons.

Write to NOR addon - write the game to NOR memory with addons.

Save type <auto> - select the game save mode. In 99.9% of cases, it will be auto, and only in the case of rigidly modified games (for example, when translating a game) or a homemade game, you need to set the desired save mode.

What mode should I start the game in? It's up to you, but if you often play one game and it supports addons, then the easiest way is to write the game to NOR memory with addons. Then, to start the game, you simply switch to the second screen and immediately launch the game with addons. Without having to choose the option you want every time.

To delete games from NOR memory, you need to go to the second screen of the menu and press the A menu will appear: 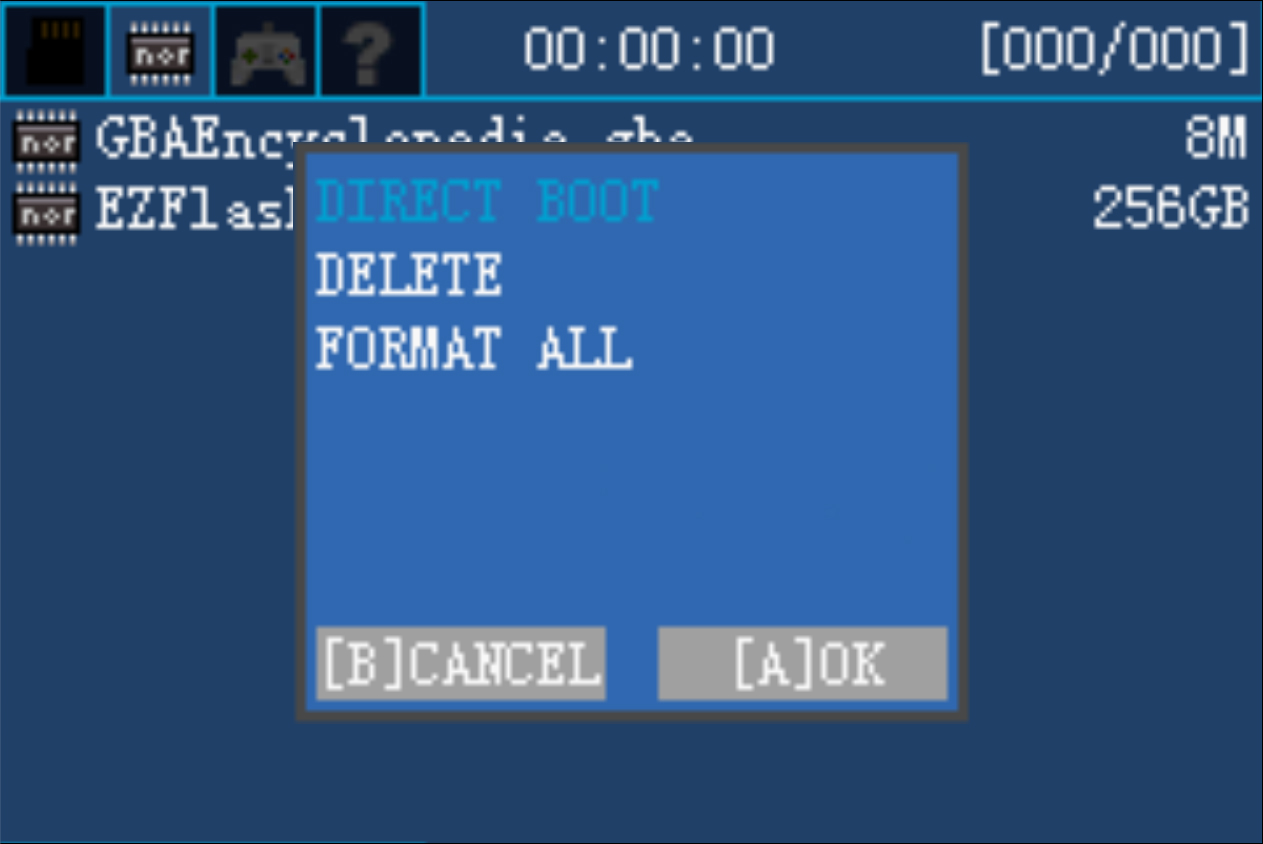 Delete - delete the game from memory.

Format All - clear NOR memory from all games.

What is NOR memory and why is it needed?

Both chips are designed to run games. What is the difference between them?

RAM is faster but consumes enough power. In turn, ROM memory (NOR is a type of ROM memory, there is also NAND memory) is a little slower, but more energy efficient.

On earlier versions of this cartridge, for example, EZ Flash IV, the RAM memory was only 16 MB, and the NOR memory was 32 MB, since the games weighed from 4 to 32 megabytes, depending on the size of the game, you needed it to run it write to either NOR memory (for large games of 32 MB) or RAM memory (for all other, lighter games).

This EZ Flash Omega PSRAM cartridge has 32 MB memory so even a heavy game can be run without NOR memory. And as such, the difference is erased. And returning to our original question, why do we need NOR memory, we can draw the following conclusions:

2. NOR consumes less power, so, the device must last longer. (The word “must” is here, because it requires additional verification but in general, it should work longer).

3. In theory, given that NOR memory is the same memory as on original cartridges, writing a game to NOR memory should provide more compatibility (that is, more games should be launched from NOR memory than from PSRAM memory).

Now about the cons:

1. NOR memory is only 64 MB, which means that many games cannot be recorded there (even two 32 MB games will not fit, but any combination of games up to 64 MB will fit).

2. The initial write to NOR memory is too damn long.

3. You can delete from NOR memory only the last recorded game (either the last one, then the penultimate one, and so on, or format the NOR memory completely).

Summing up in NOR memory, it makes sense to record a heavy (32MB) game that you plan to play for a long time. Or in case there are problems with the game. Finally, if you have disabled Fast Patch Engine for any reason.

Is there anything else you can launch besides Gameboy Advance games?

Yes, unlike the previous cartridge model, this version can run NES games as well as GB and GBC. You just need to download the ROM image of the game, write it to the cartridge and run it, you don't need to install anything else.

How to save in the game?

Saves to the Ez Flash Omega cartridge are done automatically. To save, you need to wait until you pass the checkpoint (at which the game is automatically saved) or the save location in the game, or press the save button yourself (if the game supports saving) and wait five seconds.

How to get out of the game?

1. Switch off and on the the game console.

2. To go to the main menu without turning off the the game console, press L+ R+ Start and select the Reset option. This only works if the game was launched in boot with addon mode.

For some reason, your cartridge may not be with the latest firmware.

To reflash the cartridge, you need to download the firmware archive from the official website omegakernel20200609.zip. Then unpack it and transfer the ezkernel.bin file to the root of the memory card.

Then turn on the game console and hold the key R.

Such a window will appear and the process of installing the firmware will automatically go! 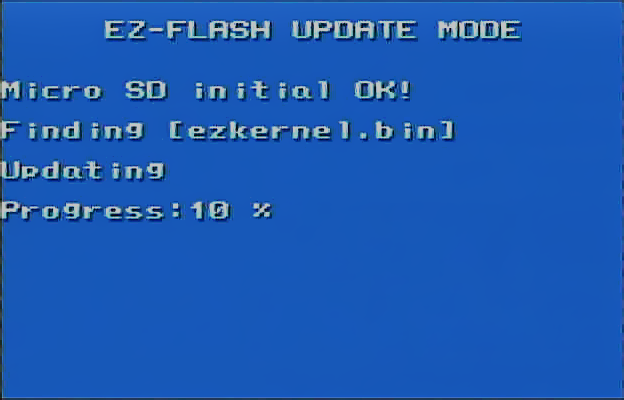 Do not turn off the game console until the download is complete!

After installing the firmware, the console will boot itself, you don't need to do anything!

On February 10, 2020, a man named Sterophonick released his own cartridge firmware, which he called SimplyLight.

I can't say that I like the design of this firmware better than the standard one, but it has a number of significant advantages:

1. System has been created so far (all system folders RTS, SAVER, IMGS, CHEAT, PATCH have been moved to it)


3. Two designs, a night theme and a regular theme. 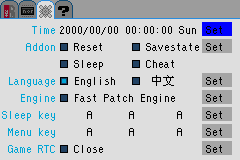 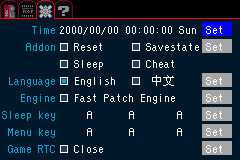 To install it, you need to download the archive SimpleLight.zip and unpack it

There will be 5 files:

Folder Demo - demo files are stored here, just copy the folder to the memory card and play with the files.

File !!!IMPORTANT!!!.TXT – this file tells about how to update the system and what changes will be.

File ezkernel-dark.bin – a file of the dark theme of the firmware.

File ezkernel-light.bin – the file of the light theme of the firmware.

How to install the firmware:

1. Create the SYSTEM folder on the memory card.

3. From the memory card itself (if you have used this cartridge before, you probably have already created many folders, such as PATCH, SAVER, and so on), transfer them to the SYSTEM folder.

4. No need to transfer game folders to the SYSTEM folder!

6. Turn on the game console box while holding the R button. The firmware will install itself and turn on.

Do not turn off the game console until the download is complete!

7. Turn off the game console (pull out the memory card, insert it into the computer) and delete the ezkernel.bin file

The firmware installation is now complete.

If the cartridge is not working properly.

So, if something does not work for you, then there can be two problems, either in the software or in the hardware.

Let's start with the hardware part, in order to check the operability of the memory, you need to hold the button when loading the cartridge Select and then you will enter Safe Mode 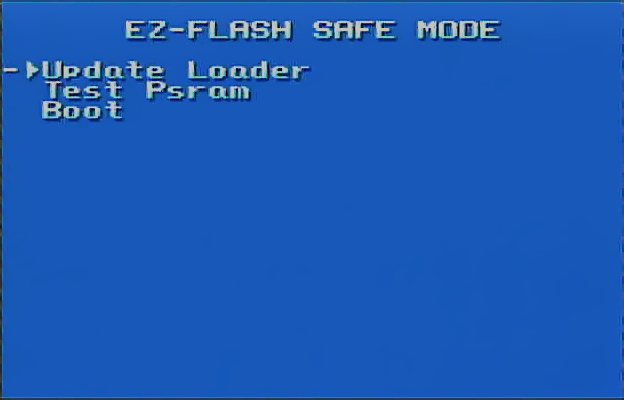 After that, select the Test Psram item.

If you write that everything is ok, then this is great. And if he writes error, then you have hardware problems with the cartridge (which in general does not prevent you from going the second way) and I don’t know what to do in this case (except that the cartridge can be returned under warranty, if any).

YOU ARE FURTHER AT YOUR OWN RISK

The second case is a software problem. We need the first item in Safe Mode, namely Update Loader. I will not describe what to do next, but I will leave instructions recovery-en.pdf from the official website, which you can follow.

That's all for now! The guide will be update further.